Galicia does not start nor end in Santiago de Compostela. Throughout its four provinces (A Coruña, Lugo, Ourense and Pontevedra) we find the most varied options to enjoy its art, culture, traditions, landscape and gastronomy.

Since we cannot cover its full offer, we are going to pay special attention to those places which will be more accessible taking into account the distances and travel from Santiago.

If you come in summer, you would surely like to spend an afternoon or a whole day at the beach. Well... wish granted! You could go to the beach by public transport to the following destinations:

Rianxo
, a fishermen's village that we love. After going to the beach, we suggest that you go for a stroll to the port and its old town, small but beautiful, filled with bar terraces where you could enjoy a beer with a tapa. You could reach Rianxo by bus, it is only 49km away from Santiago and the journey takes a little bit more than half an hour. 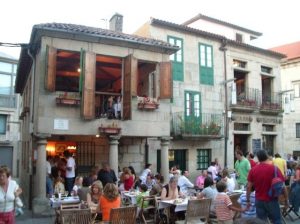 Terrace in the old town 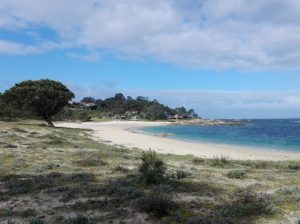 Vilagarcía de Arousa, tourist and maritime village only 20/40 minutes far from Santiago, depending on the train service that you use, as it is 57 km away from Santiago. 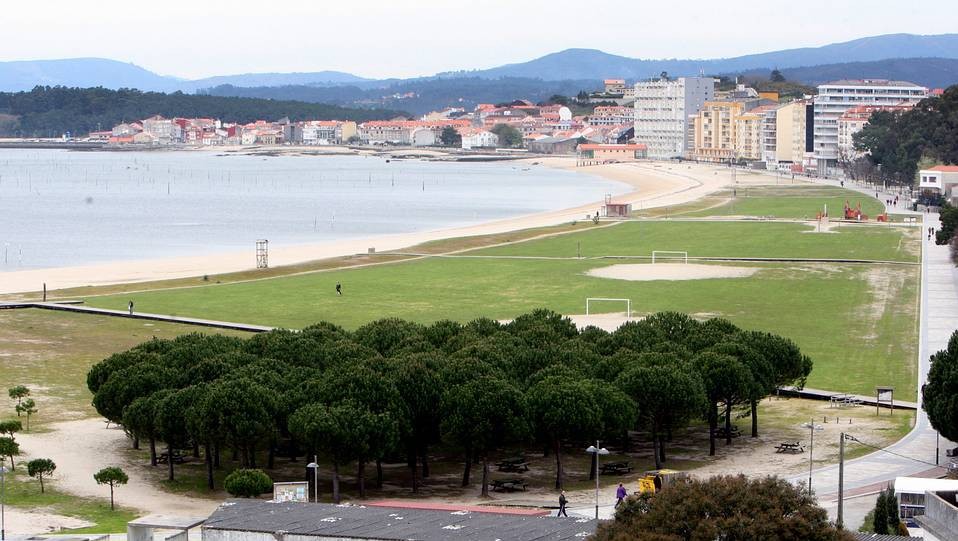 A Coruña
, a beautiful city with a couple of urban beaches (Riazor and Orzán) which offer you all the services that you may need. You could go by train or bus from Santiago (75 km away) and if you decided the train option you could be there in 30 minutes more or less.

Vigo, Islas Cíes
. Vigo is the biggest and most populated city in Galicia, located  90 km south of Santiago. Vigo offers us many beaches, however its biggest treasure is the Islas Cíes reachable by boat once we arrive to the city (by train or bus). The trip is a little bit more complicated and longer than the previous destinations, but if you have the time, this visit to the Islas Cíes is totally worth it. Did you know that the Islas Cíes are the only maritime National Park in Spain? Other curious fact: in 2007 the British newspaper The Guardian chose the Rodas beach as «the best beach in the world»

Finisterre
(Costa da Morte/Death Coast). The name of the region that includes Finisterre (Land's End), Costa da Morte, refers to the amount of shipwrecks which have taken place there throughout history due to its dangerous cliffs and frequent storms. More than two centuries ago British sailors viewed it as the most dangerous coast for the strong currents, gales and storms, sudden fog clouds and multiple shipwrecks.

But if you have a soft spot for breathtaking beaches with hardly 4 people in August, and for the lonely cliffs with a raging sea, do not miss Costa da Morte. And side by side with landscapes belonging to a Gothic tale, you could enjoy many works from the Romanesque period, bobbin-lace handicrafts, and copious feasts of local seafood.

As you probably know, Romans thought Finisterre (finis terrae) to be the most western point in the known world. Nowadays Finisterre is a fishing villages which continues the tradition of  spoken bidding in the fish auction and a place to eat extremely well. It is also the last spot in Camino de Santiago (located 90 km away from Santiago de Compostela).

Did you know that this last part, from Santiago to Finisterre, is the busiest path in the French Route, as well as being the only Jacobean route with origin in Compostela? 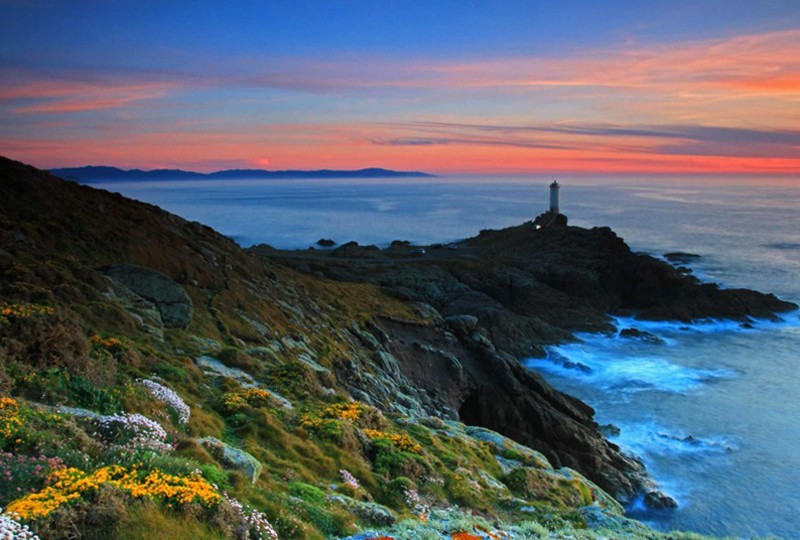 Ribeira Sacra.
The Ribeira Sacra is a border land between the provinces of Lugo and Ourense (Galicia's inland) ploughed by the rivers Miño and Sil which, on its way through the mountains, mold its breathtaking scenery. The place name "Ribeira Sacra" (Sacred Riverbanks) is connected with the great number of monasteries and temples located in the monumental canyons and steep hillsides which shake the area. In this moment you could visit 18 monasteries placed in spectacular forests surrounded by silence, vineyards and quiet waters.

The Ribeira Sacra is also known for the number of wines which possess a designation of origin. The vineyards, which can be viewed following the river stream, are laid out in a system of stone steps along the riverbanks dating from Roman times. 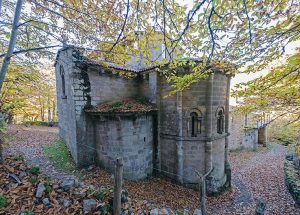 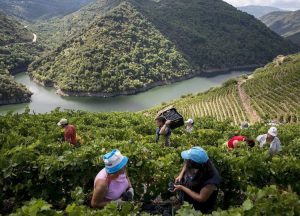 Canyons in the Miño river

If you feel like renting a car during your stay, then you will be able to explore the most unspoiled beaches as well as the most secluded places.

And if the mountains and the countryside are your thing, we suggest that you visit our forests, which many times hide beautiful treasures from the Romanesque period. 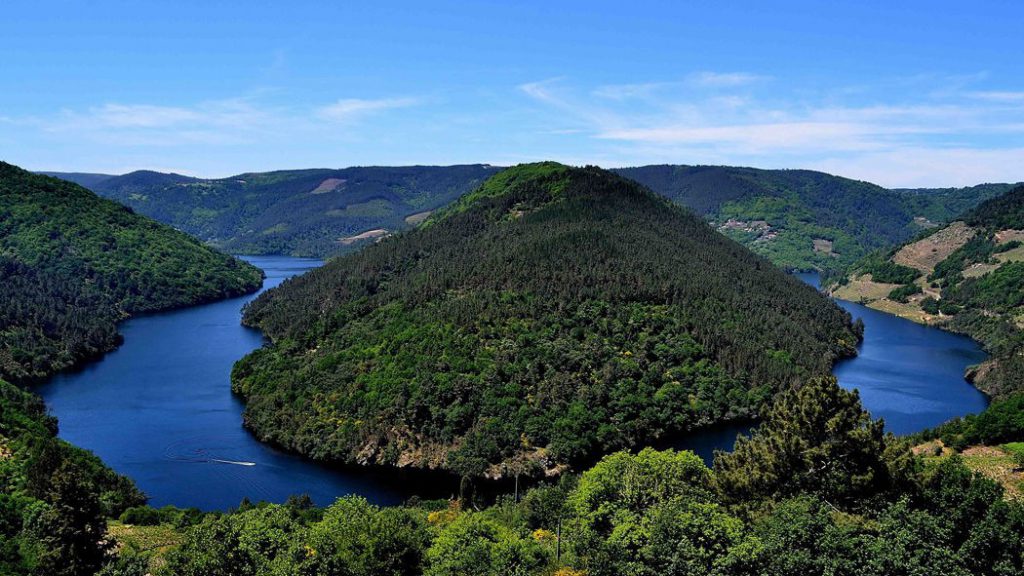 Galician's gastronomy is one of our biggest cultural heritages. Have a look at everything in the gastronomy section that we have dedicated to Santiago.

From Santiago you can easily move around by bus or train to many different cities and villages in Galicia.

Here we list three possibilities with a short description.

This city is highly recommended due to its urban beaches, its monuments, its seafront promenades, shopping and tapas areas, its old town, its parks… it has some of the region's most attractive museums as its aquarium, the Domus (interactive museum dedicated to the human being) and the science house (planetarium

Did you know that the Torre de Hércules is the only Roman and oldest working lighthouse in the world? And that it has been declared a Unesco World Heritage Site? 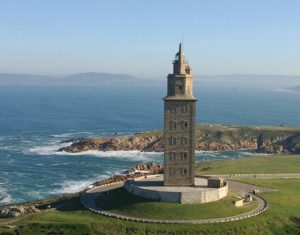 Galleries facing the sea in A Coruña

Is another of our most beloved recommendations. It possesses one of the most beautiful historic centres in Galicia; but also...

Did you know that Pontevedra has become a model and a reference for many cities in the world as in barely 15 years, it has achieved that more than 70% of the short urban trips are on foot or by bicycle? 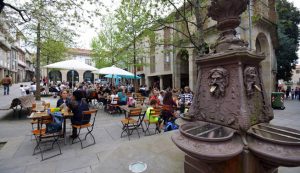 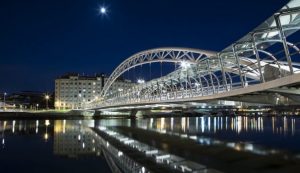 Did you know that its Roman wall (from the 3rd century) is the only one in the world which is kept in its entirety becoming a World Heritage Site as well?

Heritage Site as well? The wall surrounds its old town, and it is an enjoyable experience to walk around it, with many pedestrian areas where you will be able to find many bars to have a tapa. Keep in mind that Lugo is an excellent city to eat 😉 .

And if you have time, you can also make a short trip to Portugal. One of the most interesting frontiers to divide us is Tui-Valença, since both cities (Tui-Spain and Valença-Portugal) hide impressive monuments and landscape sights. The natural border which separates both countries is the Miño river and any of either sides appears really photogenic to any visitor. For decades Valença has been a shopping paradise for many Galicians, specially on Wednesdays, which is fair day. Valença is just 118 km away from Santiago.

The list of suggested villages is very long so we have created a small selection of the ones we love and you can see it below.

Allariz
is a beautiful village in the interior (Ourense province, 124 km away from Santiago) which received the European Town Planning Award for its project on a full recovery of the Historic-Artistic Sites. You will love to walk around its gardens and old town. We suggest that you visit some of the restaurants located on the riverside. It is an idylic place and you will eat really well. And if you fancy sweets and confectionery products, you cannot miss the almendrados of Allariz, the typical dessert in the area. 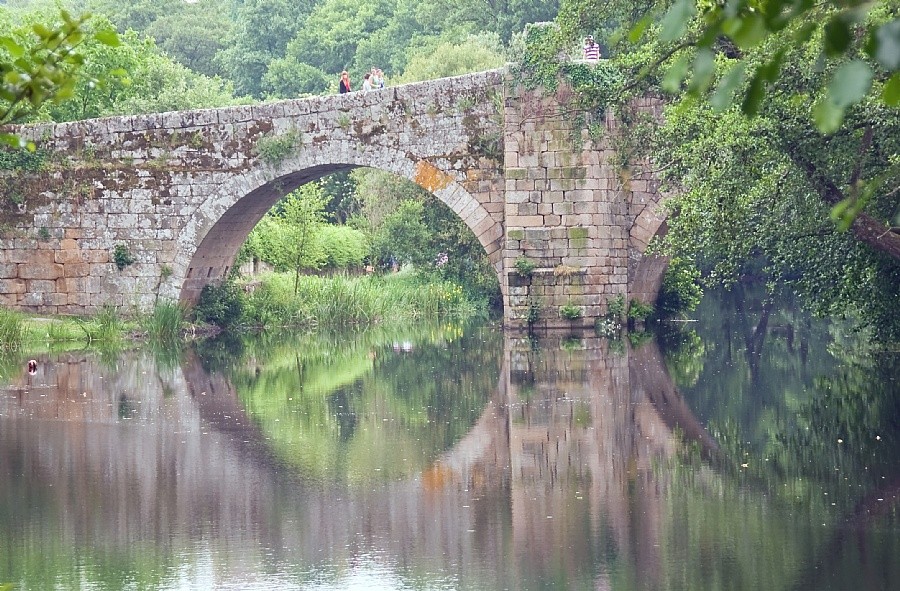 Muros
(A Coruña, 62 km away from Santiago) is a fishermen’s village with a very beautiful old town which is  really well-preserved, but the surrounding areas are the best. If you can travel by car, we strongly recommend you to go to Louro, where you could enjoy a breathtaking view: The combination of Monte Louro, the lake and the beach!

Ribadavia
(Ourense,  109 km away from Santiago), is another interior town which we love. It preserves part of its medieval wall, the ruins of the castle which belonged to the Counts of Ribadavia and it possesses one of the best preserved jewish quarters in Spain, with its own sinagogue. If you like sweets and confectionerry products, look for Herminia’s bakery (“horno de Herminia”), where you could buy and sample traditionally homemade Hebrew pastries which follow the Kosher rules. Ribadavia is also the capital of the Ribeiro wine so you could taste its wines and enjoy the natural beauty of its landscape full of vineyards. Also, the town has an active cultural agenda: “Festa da Istoria” takes place in the last weekend in August, when scenes from the medieval times as jewish weddings, knight’s jousts or falconry are represented. In July it holds the Muestra Internacional de Teatro, one of the most important international theatre exhibitions in Spain. 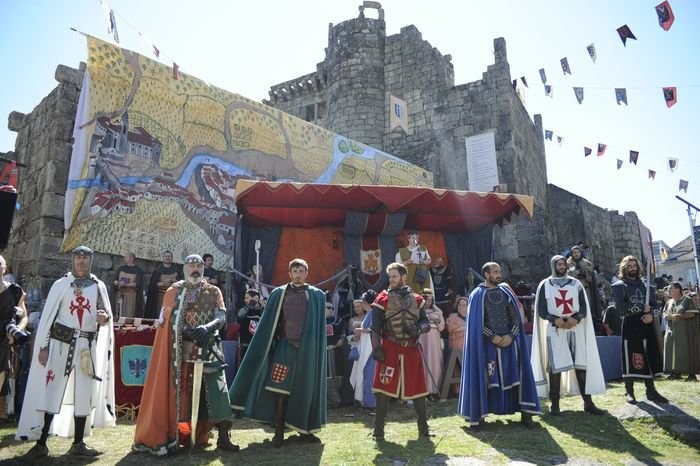 Cambados
(Pontevedra, 66 km away from Santiago) is a fishermen’s town but with a long history. It was declared Asset of Cultural Interest in November 2001. It receives many visitors during the year but mainly in summer (first weekend in August) when the Fiesta del Vino Albariño takes place, one of the oldest wine and food festivals in Spain. Its old town and the famous Plaza de Fefiñáns call for a good stroll around them.

Baiona
(Pontevedra, 123 km away from Santiago), touristic and fishermen’s village, is located South in the Rías Baixas, sheltered from the open sea by a beautiful bay. Its old town was declared a Site of Historic Artistic Interest in 1993. Baiona was the first European port to receive the news of the discovery of America. On March the first 1943, the Caravel Pinta docked in those waters. Due to this, at the first weekend in March the town holds a medieval celebration and party called La Arribada. With the commemoration of the 5th Centennial of the Discovery of America a replica of the vessel was built to remain docked, for visitors, in one of the wharves.

You can also visit the fortress that is home to the Monterreal Castle (currently a Parador Nacional) any day of the year. 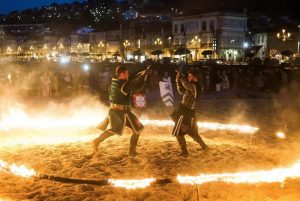 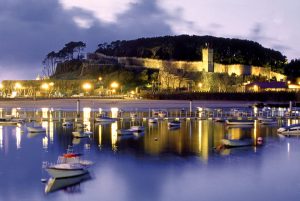 You can also check everything said about the Camino on the section allocated to Santiago.

View all posts by: Alberto

Find out more or adjust your settings.

This website uses cookies so that we can provide you with the best user experience possible. Cookie information is stored in your browser and performs functions such as recognising you when you return to our website and helping our team to understand which sections of the website you find most interesting and useful.

Strictly Necessary Cookie should be enabled at all times so that we can save your preferences for cookie settings.

If you disable this cookie, we will not be able to save your preferences. This means that every time you visit this website you will need to enable or disable cookies again.